PhD Alum Martin T. Bale has recently published a paper in World Archaeology (20 January 2017, pp. 1-15) entitled An examination of surplus and storage in prehistoric complex societies using two settlements of the Korean peninsula. The paper can be read here.
Martin completed his PhD with us in 2011 under the supervision of Professors Gary Crawford, Gary Coupland, and David G. Smith. He is currently a postdoctoral fellow at Yale University.

The CASCA Culture blog has posted a piece by Michael Callaghan (PhD, 2015) on how exclusion can sometimes work in unexpected ways. Read it online at https://cascacultureblog.wordpress.com/2016/05/04/masculinity-and-exclusion-at-an-hiv-clinic-in-namibia/

Mike completed his PhD with us in 2015 under the supervision of Professors Dan Sellen and Richard B. Lee. This blog post includes reflections from Mike’s field work in Walvis Bay, Namibia.  He is currently a Postdoctoral Fellow with the Ampath Consortium in Eldoret, Kenya. His research there examines health and change, with a focus on orphans, street children, and kinship.

PhD Alum Martin T. Bale has co-authored a paper with Rachel J. Lee in the Journal of Anthropological Research (Summer 2016, pp. 178-199) examining Incipient Mumun to Middle Mumun period (c. 1500– 400 BC) households in South Korea during a time in which social inequality developed. The paper can be read on Martin’s academia.edu page here.

Martin completed his PhD with us in 2011 under the supervision of Professors Gary Crawford, Gary Coupland, and David G. Smith. He is currently a postdoctoral fellow at Yale University.

Melissa Edwards, Gillian Cook and Nicole Murray have all recently co-published papers with Professor Esteban Parra. Melissa just defended her PhD thesis on April 1, 2016. Gillian completed her MSc in 2015 and Nicole Murray is expected to finish her Masters later this year. Below are details of the publications.

Sense-Making and Careers Outside of Academia: An Interactive Panel with Anthropology Alumni, April 1, 2016

Professor Alicia Hawkins, who completed her PhD (2000), MA (1993) and  BA (1991) in our department, has teamed up with Joseph A. Petrus, Lisa Marie Anselmi, and Professor Gary Crawford to write Laser Ablation-Inductively Coupled Plasma-Mass  Spectrometry analysis of copper-based artifacts from Southern Ontario and the chronology of the indirect contact period. The article appears in Journal of Archaeological Science: Reports 6 (2016) 332-341. Alicia is currently an Associate Professor at Laurentian University.

John L. Creese (PhD, 2010) has published an article titled Emotion Work and the Archaeology of Consensus: the Northern Iroquoian Case in World Archaeology [V. 48(1):14-34]. The article illustrates the central role of emotion in the formation of consensus-based political systems. Looking at Late Woodland longhouse societies of north-eastern North America, the paper shows how emotion work that connected individual bodies with the body politic produced historically particular forms of power and political subjectivity. The paper can be read here. John is currently an Assistant Professor at North Dakota State University.

Zoë H. Wool (PhD 2011, supervised by Professor Todd Sanders) is currently an Assistant Professor in the Department of Anthropology at Rice University.  She has just published Attachments of Life: Intimacy, Genital Injury, and the Flesh of the U.S. Soldier Body, a chapter appearing in Living and Dying in the Contemporary World: A Compendium, edited by Veena Das and Clara Han (University of California Press, 2016, pp. 399-417). Zoë has also recently published her own book  After War: The Weight of Life at Walter Reed (Duke University Press, 2015) explores how the American soldiers most severely injured in the Iraq and Afghanistan wars struggle to build some kind of ordinary life while recovering at Walter Reed Army Medical Center from grievous injuries like lost limbs and traumatic brain injury. PhD graduate Catherine Merritt (PhD, 2014, supervised by Professor Susan Pfeiffer) will begin her SSHRC Post-Doctoral Fellowship in January 2016 at the Centre for Anatomy and Human Identification at the University of Dundee. She is looking forward to continuing her research on the ways body size impacts skeletal aging. Catherine held a SSHRC Doctoral Fellowship while she was a graduate student at the University of Toronto and was co-President of the AGSU for 2.5 years. She has recent publications in the American Journal of Physical Anthropology, Journal of Forensic Sciences, and International Journal of Paleopathology.

PhD Alumni Jude Fokwang has an article on Fabrics of Identity: Uniforms, Gender and Associations in the Cameroon Grassfields appearing in Africa [85(4): pp 677-696; doi:10.1017/S0001972015000625]. Since completing his PhD in 2007, Jude has also published a book entitled Mediating Legitimacy: Chieftaincy and Democratisation in Two African Chiefdoms (2009, Langaa RPCIG). He is currently an Assistant Professor of Anthropology in the Department of Sociology at Regis University, Denver.

Matthew Walls Hired as Assistant Professor at the University of Calgary

Congratulations to PhD Alum Matthew Walls for being hired into a tenure track position at the University of Calgary. Matthew completed his PhD in 2013 under the supervision of Professor Max Friesen. Since then he’s been a post-doctoral fellow at the University of Oxford Institute of Archaeology.

Danielle Macdonald Hired as Assistant Professor at the University of Tulsa

Congratulations to PhD Alumna Danielle Macdonald (PhD, 2013) for her recent hire as an Assistant Professor of Anthropology at the University of Tulsa in Oklahoma. Danielle completed her PhD in 2013 under the supervision of Prof. Michael Chazan. Her research interests include microwear analysis, the Epipalaeolithic, material culture studies, surface metrology, and the chaîne opératoire. She is co-director of the Kharaneh IV excavation project in the Azraq Basin, Jordan, alongside another PhD Alumna, Professor Lisa Maher (PhD, U of T, 2004).

Congratulations to Karyne Rabey, now an Assistant Professor at Midwestern University. Karyne completed her PhD with us in 2014 under the supervision of Prof. David Begun. She leaves her position as a Postdoctoral Associate in Evolutionary Anthropology at Duke University to join the faculty at Midwestern. We wish Karyne all the best in this new leg of her career!

Seçil Daǧtaș has been awarded the 2015 Sakip Sabanci Award

Congratulations to PhD Alumna Seçil Daǧtaș , recipient of the 2015 Sakip Sabanci International Research Award! The annual prize is awarded to recognize distinguished contributions to research on all aspects of Turkish culture, society and politics. Further details at http://award.sabanciuniv.edu/

Seçil defended her PhD in June, 2014 under the supervision of  Prof. Janice Boddy, and is currently an Assistant Professor  in the Department of Anthropology at the University of Waterloo. 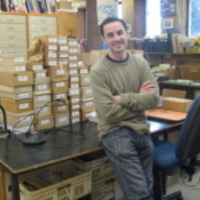 Adam Allentuck (PhD, 2013) has published an article appearing in the Journal of Social Archaeology (2015, Vol. 15(1), pp 94–115) on “Temporalities of human– livestock relationships in the late prehistory of the southern Levant.” The paper can be read on Adam’s academia.edu page here. He’s also published in the Cambridge Archaeological Journal (V. 25(1): 45-62) The title of that paper is “An Acquired Taste: Emulation and Indigenization of Cattle Forelimbs in the Southern Levant”. Adam is currently a postdoctoral fellow at the Institute of Archaeology, University College London.